The social network’s incongruities better its experience, if you know how.

On a recent Tuesday, I opened a just-begun livestream on Facebook from NASA’s official page with a panel of experts discussing Europa’s plumes (or something like that) and ended up sticking around for most of its hour-long duration because of the ridiculous realtime comments from some of its ~4000 viewers. While some participants were genuinely interested in the opportunity to engage the host’s authority with relevant and invested questions (which were intermittently fielded,) the vocal majority were aggressive, ignorant, and provocative shouts. From my observation, the most noticeably manic and persistent of these came from user Shane Langman. “Nasa can telephone the moon in 1969 but can't get a phone signal in death Valley in 2018,” he noted 16 minutes in. “We cant leave the earth or we'd have left it by now.” And there was Bobby Smith, who felt compelled to express his authority on NASA’s inauthenticity: “[I’ve] been researching since 2012 no real pics of anything all cgi.” 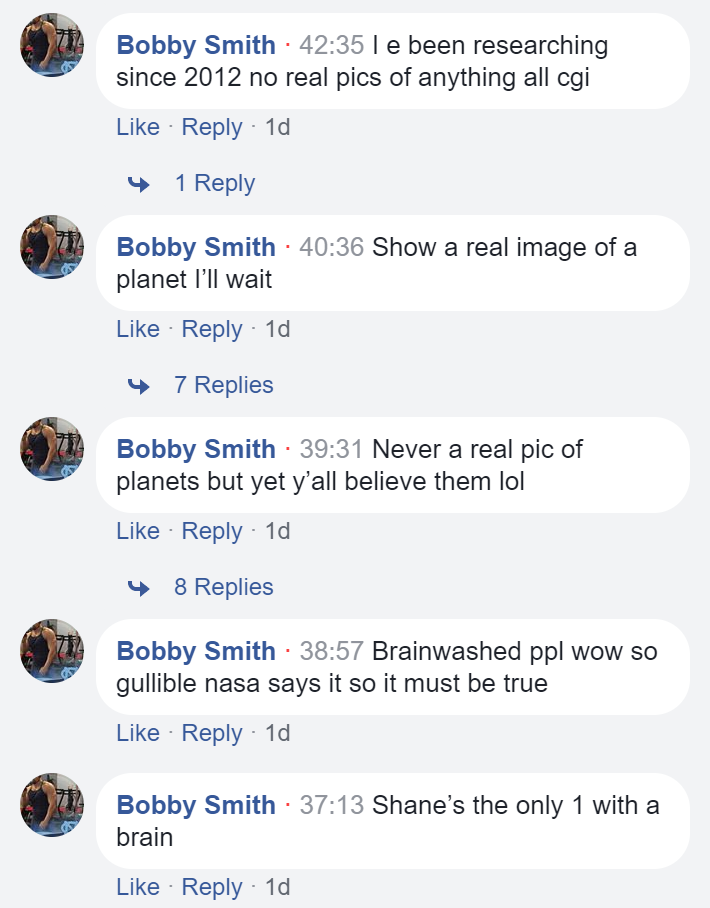 Assuming the additional all-caps, sans-avatar ranting I remember reading live was deleted after the fact by the culprits and/or the page’s administrator, it’s worth noting that the remaining archive is full of sincerely positive feedback: “It would be awesome to discover life in europe!!” Indeed.

After a few minutes of gawking at the mess, I noticed that the broadcast was being simultaneously streamed on Periscope (or is it Twitter Video? or Twitter Live?) so I opened both feeds side-by-side to compare their audience’s behavior. The Periscope’s viewers averaged about 1000 strong, and their comments were noticeably more orderly and decipherable. There was still trolling and self-promotion, but it wasn’t allowed to disrupt the rest of the committed discourse, perhaps because of each post’s character limit or rationed screen time. Looking between them, the contrast in the user culture and the function of the two services during the same, simultaneous stream was at discouraging odds with their respective popularity.

Neither are really very good ways to watch live video - Periscope, notably, was never designed for professional studio broadcasts - but the relentless malicious nonsense from the Facebook viewers pushed all attempts at real engagement away so quickly that I could see no point in making them at all. To be blunt: every conceivable corner of Facebook is an unusable cesspool (even in the shadow of NASA earnestness,) and its worth considering that something about the design of Twitter properties generally discourages such overwhelmingly stupid noise. That’s not to say that harassment, hate speech, misogyny, and radical racism have not been religiously neglected or mishandled as has been well-reported throughout the network’s history - perhaps even more than any other - but I (a cis white man, mind you,) have seen much more of these on Facebook in the wild than I have on Twitter during my longtime use of the two, despite spending exponentially more attention on the latter.

In my sparse Facebook browsing, I have witnessed childhood friends, professional acquaintances, and family members both distant and immediate publicly shame, harass, belittle, and spitefully argue with each other for the sake of absolutely zero meaningful resolution, conclusion, or intellectual progression. In my decade of daily Twitter use, I have seen tens of pedophiles and rapists publicly outed, suicides averted, government censorship circumvented, stories broken, artists made, and marginalized voices outspoken. I have also Tweeted things in the past (mostly variations of “I want to die”) that would now get my account temporarily suspended, as per the company’s latest attempts to minimize its platform’s toxicity - an encouraging suggestion that Twitter is finally catching up and learning to avoid its cultural blunders, which have been the single greatest exception to its most valuable core identity: its mistakes. 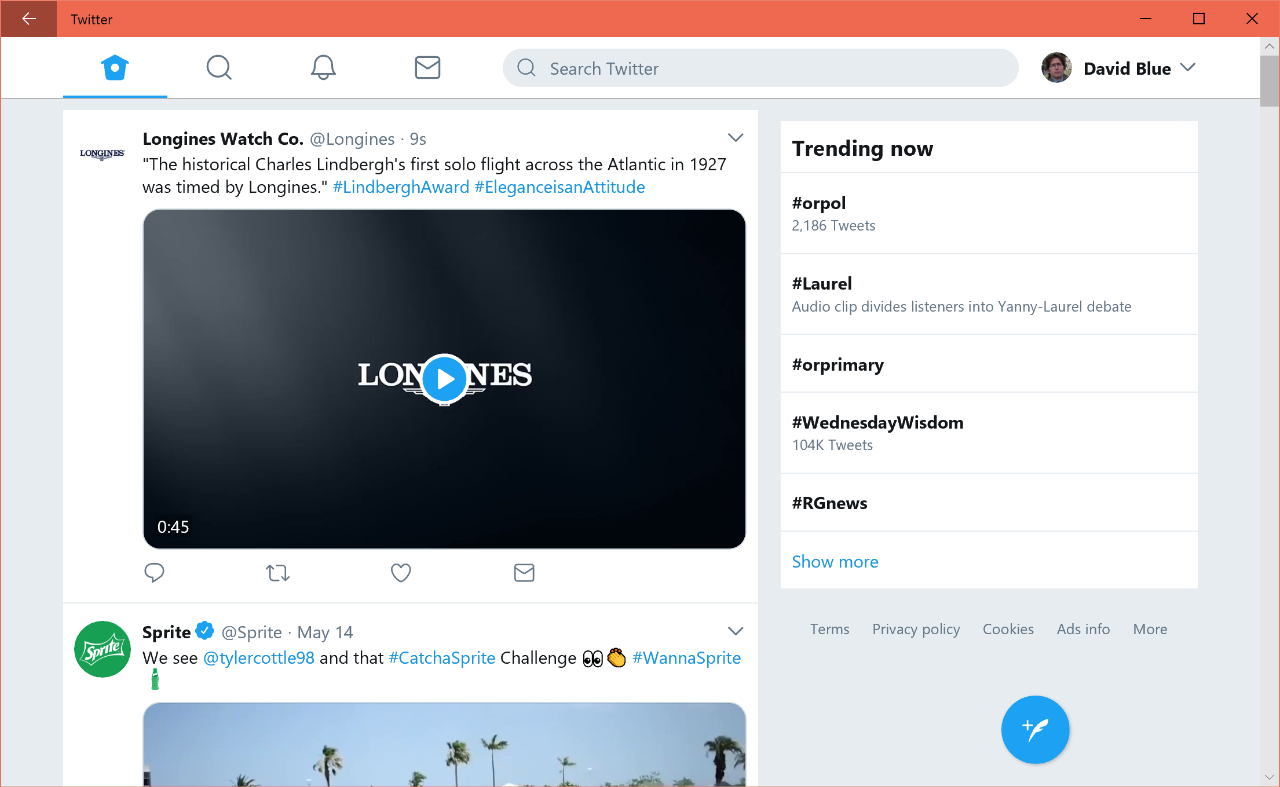 Two weeks ago, Twitter proudly released the first redesign of its native Windows 10 app since its debut in 2015 - leading a new generation of upcoming “lightweight” Progressive Web Apps and - true to form - immediately reclaimed the title of clumsiest, least-useful Twitter client available. PWAs represent the industry’s readiest effort to “bridge the gap between web and mobile apps,” for which expanded compatibility must surely be the best case to make. According to Google - supreme enemy of the open web and all tasteful design - PWAs are offline-first, instant-loading, and immersive - none of which are reasonable priorities in building a Twitter client for Windows, an operating system running primarily on very powerful hardware. This sort of idiocy can be reasonably expected of Twitter, but bewilderingly, the Great Minds of tech journalism seem to be unanimously pleased by this decision, which invites one to suspect that they’ve all switched secretly to the exclusive, illustrious HP Elite X3 - the only smartphone on sale running Windows 10, because Twitter’s execution of these misaligned goals is mindbogglingly foul to look at and unnecessarily frustrating to use. After doing my best to put up with it for a few days, I found myself unable to conceieve of a single advantage this new application has over literally any alternative.

3 out of the 5 bulleted “highly-requested features” listed in their announcement are just… catching the app up with the web client as it’s been for years: the 280-character limit, Explore tab, and Bookmarks. “Adding” these web-established operations to an even-more-web-based application surely didn’t present much of a workload, but perhaps removing functionality justified the investment. The F and T keys no longer operate as shortcuts for liking and retweeting, which is such a misguided oversight that I can’t help but wonder if this app was actually intended to be utilized by anyone at all (besides HP Elite users.)

Am I missing something? Can you hear me? Are there any flesh-and-blood Twitters users left? 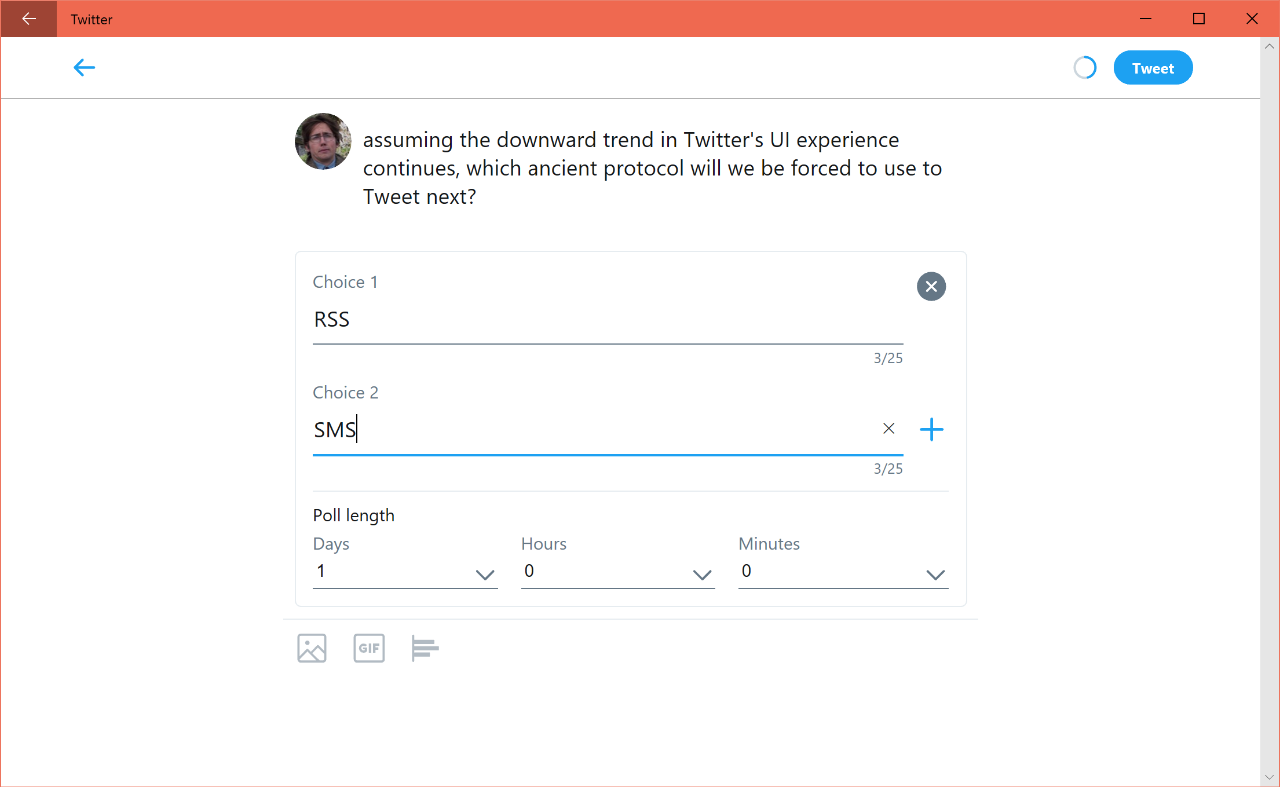 Then again, the ungainliness of Twitter’s new offspring could be attributed to the perpetual tragedy of its mother’s peril. The company’s luck has been on the down-and-out for eons in tech time: from its most recent plain text password blunder, to its constant inability to handle abuse, its endlessly tumultuous management turnovers, and its growing disinterest and disfavor among the public and potential investors alike - our cultural relationship with Twitter and its identity as a social network remains dramatically tense well past its tenth year, which is good news for its continued survival. One could certainly argue that the Tump presidency alone spared Twitter from a painful decline into irrelevance (or at least postponed it,) but I think we should acknowledge by now that turmoil is an integral component of the brand as an outlier in the connected community palette.

For myself as a long-dependent occupant, its inconsistencies and contradictions are endearing and necessary - a competent, profitable, and sensical Twitter may as well be Facebook. If you’ve been Tweeting as long as I have, you’ll likely remember that the company’s own offerings had occupied the bottom-most position in the hierarchy of preferable available clients throughout time and across all manner of operating systems until it finally nailed its Android and iOS software and usurped longtime third-party staples like TweetBot and Twitterific just a few years ago. Gadget blogging and What’s in my Dock? videos may very well be long-dead relics of a different era in tech media, but it’s disheartening to find through research that the steadily-declining quality of our user experience has been allowed to continue without much protest. Justifiably or not, Twitter has persisted in adding stuff nobody likes as they’ve gradually neutered all the great third-party development.

TweetDeck for Windows was perhaps the most powerful mainstream enduser social application that will ever exist. Before Twitter absorbed the tool in 2011, its diverse account integration allowed a user to send a single post across Facebook, LinkedIn, MySpace, Google+, and multiple Twitter accounts simultaneously, and they could configure the client to do so with just the Enter key! In retrospect, it was naive to assume that such potent spam capabilities would continue to be entrusted to the general population without challenge, but the modularity and customizability of TweetDeck prime as a standalone application made it useful as hell and quite the power trip. Now, it exists only as a tamed, up-to-brand-guidelines web application, yet remains the definitive way to use Twitter on a PC if one desires an ad-free, single-window experience if only because of its congruence with another, even more forgotten feature of the service: lists. 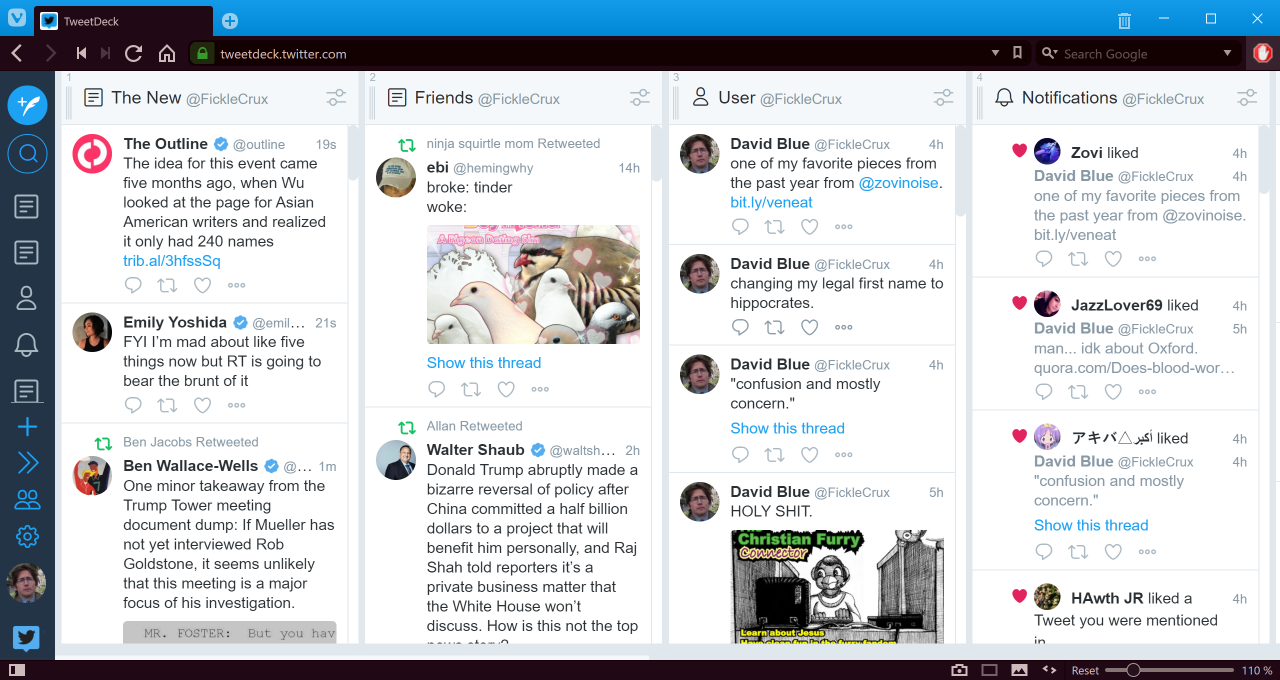 This is how I’ve seen desktop Twitter since I lasted looked at my timeline in 2010. Since then, I’ve followed about 5000 more accounts, so I’d imagine it’s a damned mess. I have a private list of my friends, which I try to read in its entirety, and a list of nearly 500 journalists, publications, and musicians whom I’ve found particularly fresh and original. Thanks to these, Tweets are presented in order, uninterrupted by ads. (They function the same on iOS.) The network’s linear chronology is an absolute use condition for me, so I’m thankful I completely missed the beginning of their progression toward algorithmic relevance thanks to my lists, and as I’ve since happened upon distress from mutuals and non-mutuals over missed or stale Tweets, I have taken the time to relay my gospel: lists are linear. And since promoted and sponsored Tweets began overwhelming and perturbing timelines, I’ve seen the displeasure and repeated: lists are linear and ad-free!

I realize how irritating it is when one plays the why doesn’t anyone listen to me?! card, so I’ve created a Twitter Moment to document the confusing silence I’ve gotten in response to these suggestions (though I couldn’t find any cases from the past, so I may be misremembering the extent of my charity,) and pledging to refrain from revisiting this pet advice of mine when writing about Twitter or other social networks in the future.