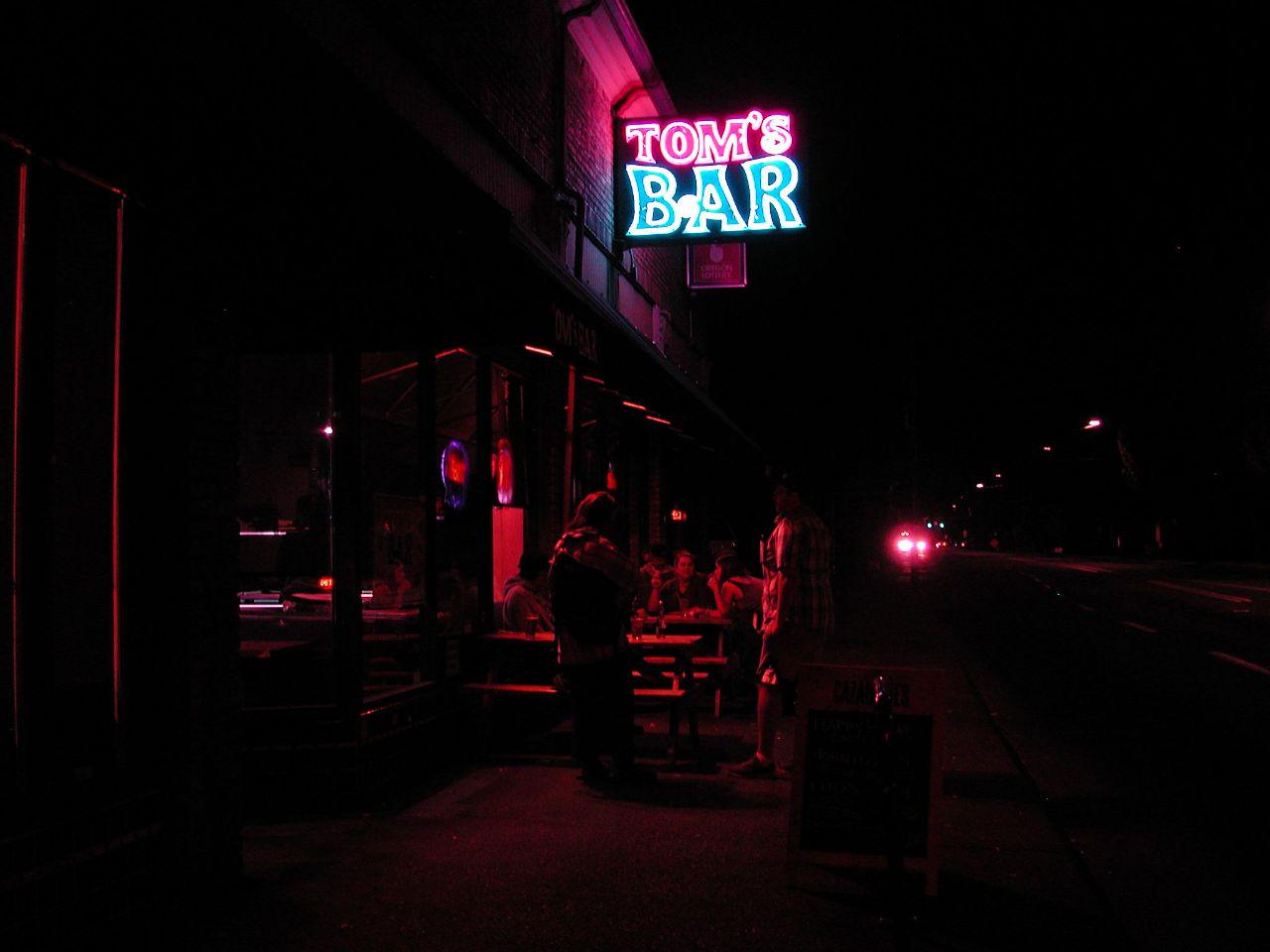 I have to just fucking do it — I’m going to start writing about music in this space. There’s virtually zero chance that I’ll shout over other voices of music criticism as long as Bilge remains so poorly optimized for SEO, and Portland, Oregon has been far too confusing to deprive myself the opportunity to work out any understanding of its youth culture. It’s not a lack of talented musicians in the area — the opposite is true — but a severe drought of the kind of tragedy and trauma which ultimately give acoustic American musical expression its whole shit. What I caught of the weekend’s invasion with Santa Cruz musicians were all praiseworthy, tight and confident performers who’d obviously invested heavily in their equipment and their presence here. Joe Kaplow arrived with a sort of bespoke magazine rack containing 20 neatly-arranged effect pedals, leading me to wonder for a moment if I was about to witness banjo powerviolence for the first time, but he explained that he simply preferred their availability, and wouldn’t use “more than a few at once,” and seemed almost genuinely perturbed by my attempt to explain the specific industrially-influenced involvement of audio hardware in hardcore punk and grind performance which I was referring to with the term. (“Powerviolence” has apparently become an ambiguous one around these parts, and I’m sure he was actually just utterly uninterested.) 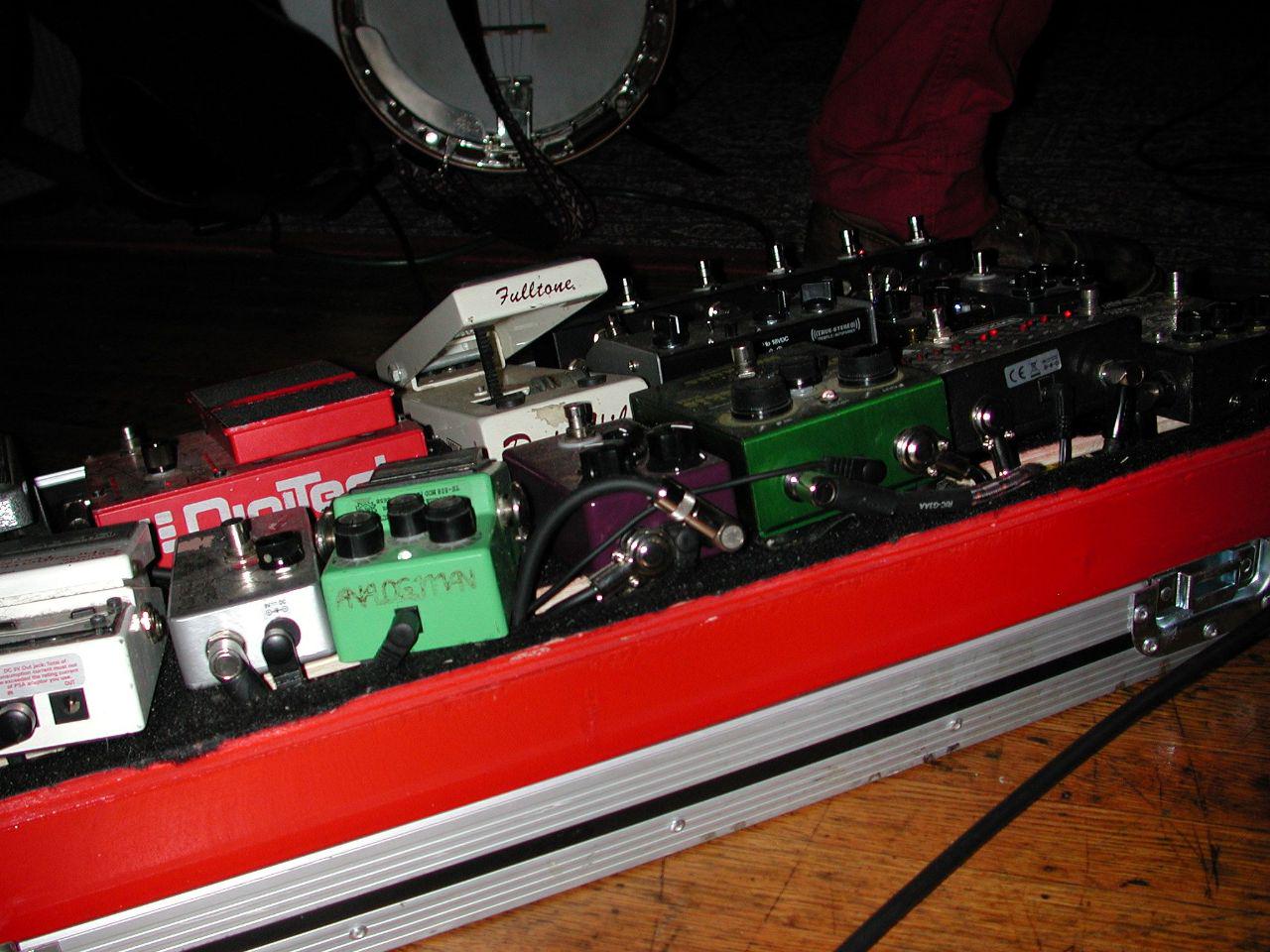 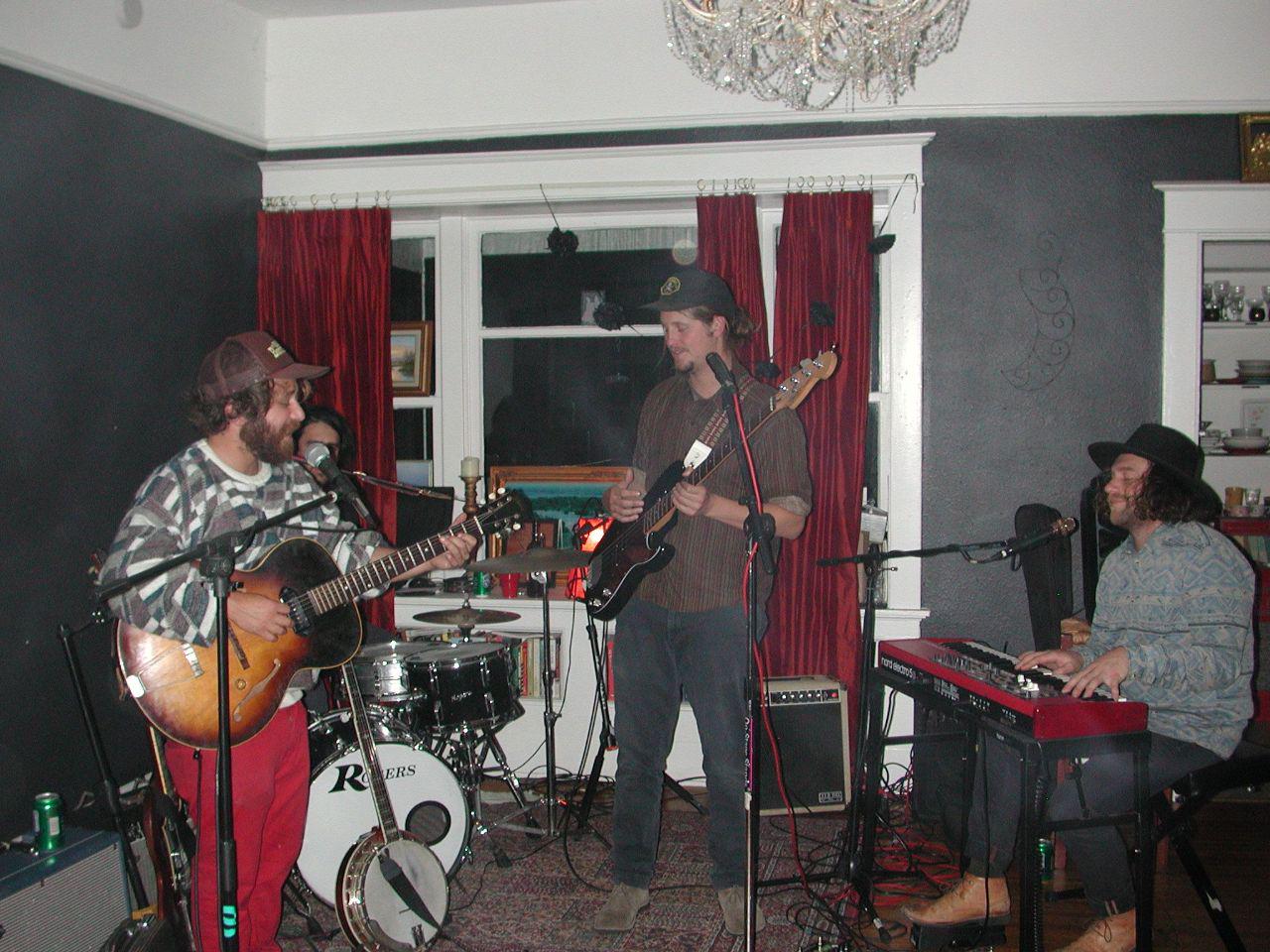 No more than two dozen guests made up their peak crowd of witnesses, yet Joe and his band certainly made good on shear effort expended in laying down a hearty, back-to-back recital for us at an unusually protracted rate, though apparently either they, the Getaway Dogs, or The Curfews had insisted that a “cover charge” be collected at the door of the house show. It’s not my business to to dwell on or attempt to investigate an unsubstantiatable rumor, but I understand this could have been a breach of house show etiquette. What I do know is that one of the visiting musicians stole 4 flat AA batteries out of my COOLPIX and apparently attempted to jack its ancient Compact Flash card, which is only hilarious because they didn’t succeed. Regardless, it should be said that Joe Kaplow’s songwriting is more flattered by Indie mags than my own ears, though one still wishes for a more substantive topic than “I thought it’d be cool make a corn cob pipe, so I did.” Then again, much of what you’ll find at this URL reads a lot like “I thought it’d be interesting to make a WordPress blog, so I did.” White people have truly run out of shit to say, haven’t we?

The inspiration that sparked ‘I Said’ moved me like a puppet. So much so that I had to pull over at the top of Altamont Pass, by the huge windmills, and write the song in the back of my van.

Reflection upon just about anything can have personal meaning, but no amount of musicianship can mask a stark lack of context. I do wonder if Indie Folk should just return to the megachurch, where songwriters like Joe and musicians of his crew’s sort are literally handed a gigantic audience of trained experts at finding profound meaning where it probably isn’t, along with great salaries, from what I hear. Otherwise, all that taxing preparation and expenditure will only lead to more forgettable performances. Or perhaps I am simply misguided in my assumption that artists work exclusively to communicate something lasting to someone. Every conversation I’ve had with Portlanders about Portland music has been predominantly about what artists and their audiences wear and how they behave instead of what they’re trying to say. There’s nothing inherently wrong with leaving things petty, lyrically and choosing to remain content with established sounds, musically, as long as your work is advertised as entertainment, not performance.

Before I came Northwest, my fiancé had been exposing me to a variety of its music, which I mostly tolerated politely. Dozens of albums and EPs were played through once and forgotten forever, but when I arrived at a demo tape recorded by her long time friend’s band, The Cigarette Burns, I finally heard something familiar, yet vitally compelling: pissed off punks having fun. That said, I should admit that I only attended Saturday’s show because he was on the ticket, and I’m still glad I did.

After what felt like hours of drowsy corn cob pipes, Christmas sweaters, and old sweethearts at fifty beats per minute (there were literally two young men sleeping within 15 feet of the bands for the duration,) Ricky sat himself on a stool in the midst of Kaplow’s sprawling gear load at 2:30AM with only his guitar and his voice. Unfortunately, I’d squandered the Nikon’s batteries on Californians (the lighting was not ideal anyway,) so I thought I’d share his set on Periscope. Though Ricky had been patiently present and attentive for the entire night (unlike myself,) those who were left of the entertainers bolted to the porch for a lively discussion about unicycles and quinoa while Ricky told us about hate, jealousy, and feeling like shit in a somber elegy. Any further adjectives may edge dangerously close to a half-assed “concert review,” which I am not yet qualified for, but I will say that Ricky’s sincerity made him most engaging part of the night, and his frustrated, conclusive nod to The Cigarette Burns was the first real punk sounds I’ve yet heard in Portland. 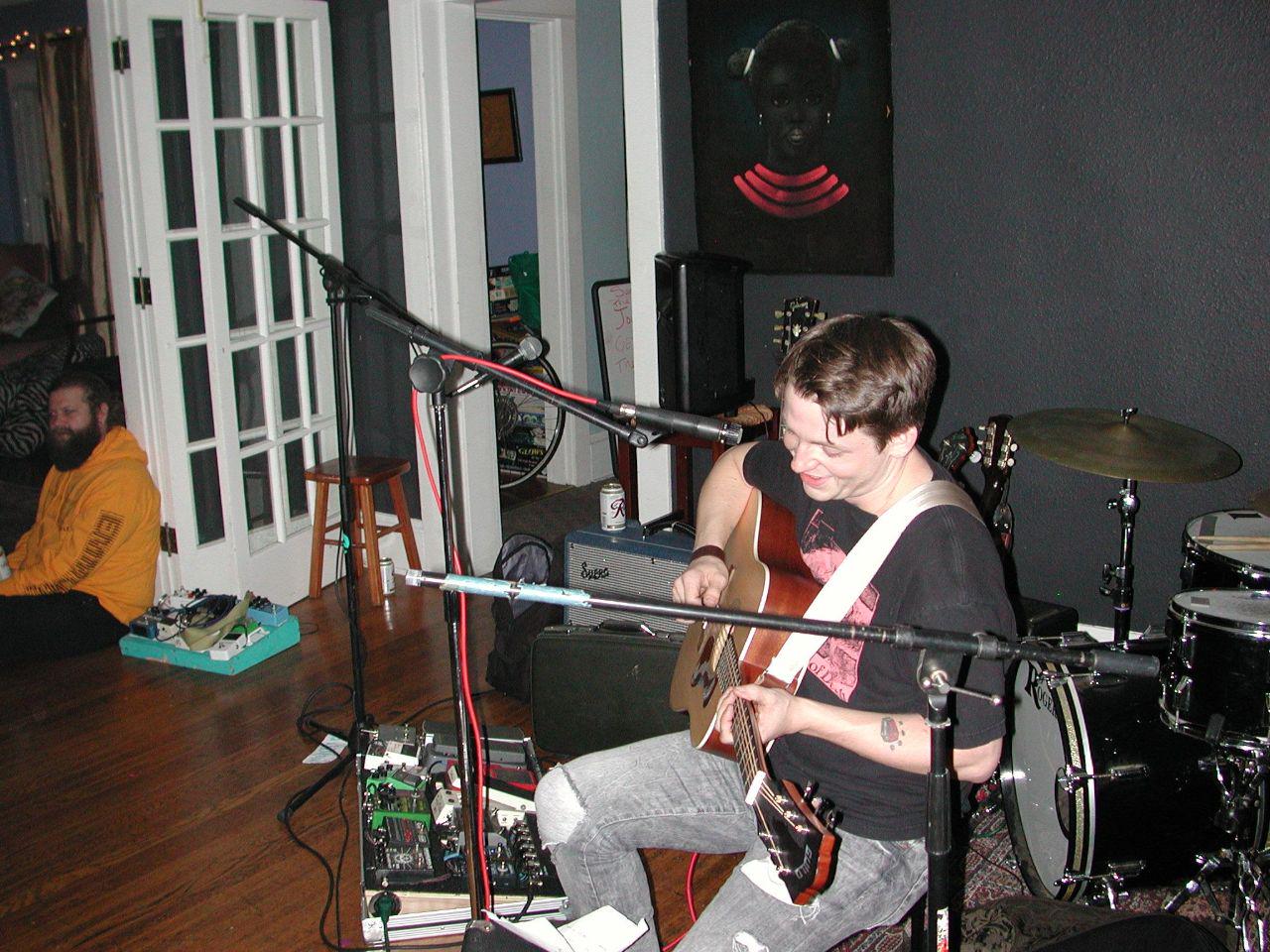 I realize sharing this small experience does little to grow the conversation, but this isn’t a magazine, and I am desperate for answers about the bizarre reality in which I find myself. When Ricky dedicated a song to Courtney Love, one of the male musicians(?) yelled “Courtney Love fuckin’ killed Kurt Cobain!” which was such an unbelievably cliché happening/decision that I’ll surely spend the rest of my days in this city unsuccessfully attempting to work it out, aloud. I can’t quite recall who it was last Fall that responded to my frustration by challenging “what if there’s nothing to understand?” While this may be a reasonable conclusion, I suspect it’s not one I could accept as long as I remain here without losing my mind. If Portland is truly the dimensionless bastion of apathy and intellectual stagnancy for young Americans, I must blog my way out it as soon as possible (for Pete’s sake, just give these kids some antidepressants,) but I’d still like to believe the idea too oxymoronic to actually exist.